The next 20th Anniversary campaign is up as expected, with the next special pack announced!

PS: Reprints for Artifact, Knightmare and Trickstar? What could this all mean for future releases? 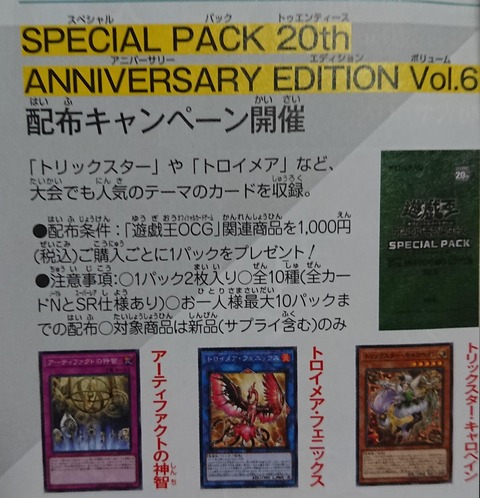 The next 20th Anniversary campaign has been announced, with the Special Pack 20th Anniversary Edition Vol. 6. 10 card types are in this pack and each pack will consist of 2 cards, which you can get for spending a specific amount on Yu-Gi-Oh! OCG Asia products in your local stores!
(Only a maximum of 10 packs will be given per purchase, while stocks last)

The commencement date for the campaign is not included yet, but we expect it to be similar to the past Special Pack and commence on the release date of Chaos Impact, which releases on July 13.

Currently 3 cards are confirmed for the pack (All 10 card types in the pack will be available as Normal or Super Rare):
Artifact Sanctum
Knighmare Phoenix
Trickstar Corobane