How many of you remember these cards from the anime?

The packaging for Animation Chronicle 2021 is out and it showcases Leo Utopia Ray, Starving Venemy Dragon and Dragonroid!
(Only Leo Utopia Ray effect is provided below. The other 2 cards are currently not shown yet) 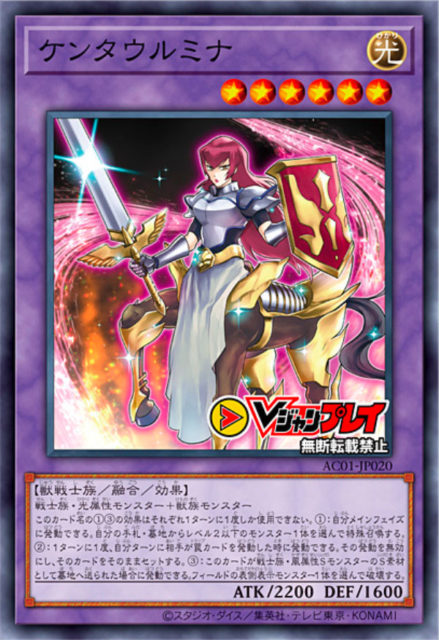 AC01-JP020 ケンタウルミナ Centaur Mina
LIGHT Beast-Warrior / Fusion / Effect
LV6 2200/1600
Materials: 1 LIGHT Warrior monster + 1 Beast monster
You can only use the 1st and 3rd effects of this card’s name each once per turn.
(1) During your Main Phase: You can Special Summon 1 Level 2 or lower monster from your hand or GY.
(2) Once per turn, when your opponent activates a Trap Card during your turn (Quick Effect): You can negate the activation, and if you do, Set that card.
(3) If this card is sent to the GY as Synchro Material for a WIND Warrior monster: You can destroy 1 face-up monster on the field. 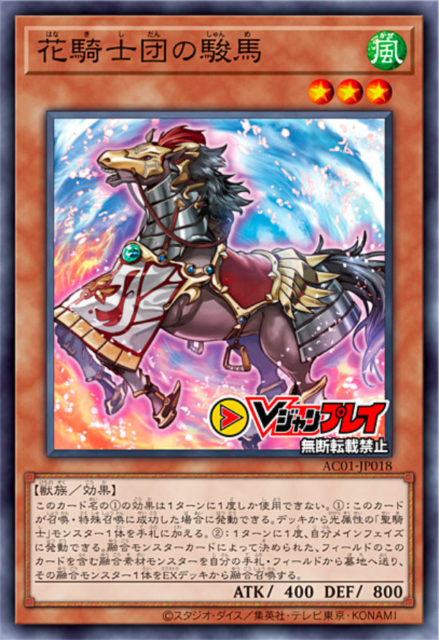 AC01-JP018 花騎士団の駿馬 Hana Kishi Dan no Shunme (Horse of the Floral Knights)
WIND Beast / Effect
LV3 400/800
You can only use the 1st effect of this card’s name once per turn.
(1) If this card is Normal or Special Summoned: You can add 1 LIGHT “Noble Knight” monster from your Deck to your hand.
(2) Once per turn: You can Fusion Summon 1 Fusion Monster from your Extra Deck, using monsters from your hand or field as Fusion Material, including this card on the field. 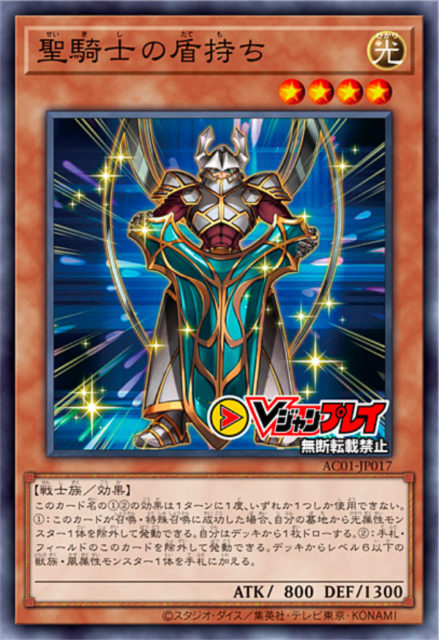 AC01-JP017 聖騎士の盾持ち Noble Knight’s Shield-Bearer
LIGHT Warrior / Effect
LV4 800/1300
You can only use either the 1st or 2nd effect of this card’s name per turn, and only once that turn.
(1) If this card is Normal or Special Summoned: You can banish 1 LIGHT monster from your GY; draw 1 card
(2) You can banish this card from your hand or face-up field; add 1 Level 6 or lower WIND Beast monster from your Deck to your hand. 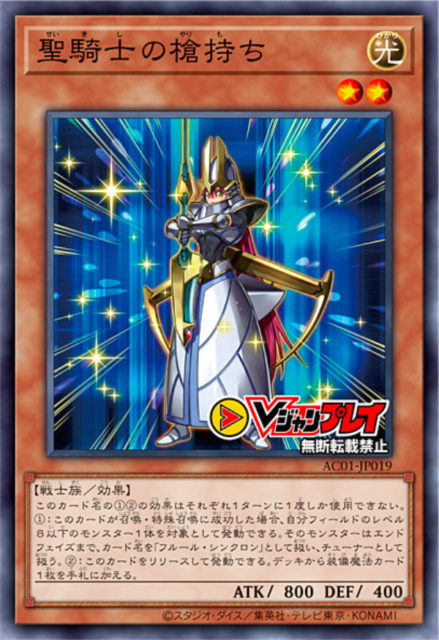 AC01-JP019 聖騎士の槍持ち Noble Knight’s Spearholder
LIGHT Warrior / Effect
LV2 800/400
You can only use the 1st and 2nd effects of this card’s name once per turn.
(1) If this card is Normal or Special Summoned: You can target 1 Level 8 or lower monster you control; until the End Phase, its name becomes “Fleur Synchron”, also it is treated as a Tuner.
(2) You can Tribute this card; add 1 Equip Spell from your Deck to your hand. 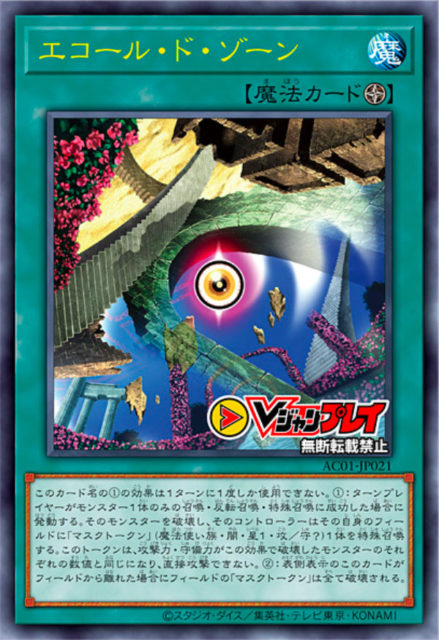 AC01-JP021 エコール・ド・ゾーン Ecole de Zone
Field Spell Card
You can only use the 1st effect of this card’s name once per turn.
(1) If the turn player Summons exactly 1 monster: Destroy that monster, and if you do, Special Summon 1 “Mask Token” (Spellcaster/DARK/Level 1/ATK ?/DEF ?) to the destroyed monster’s controller’s the field. Its ATK/DEF become the ATK/DEF the destroyed monster had on the field, but it cannot attack directly.
(2) If this face-up card leaves the field, destroy all “Mask Tokens” on the field. 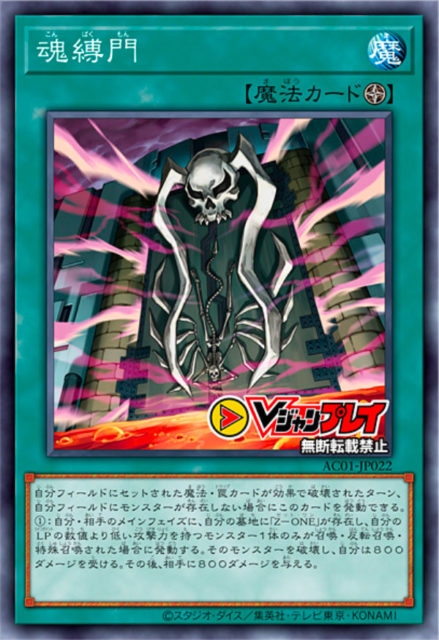 AC01-JP022 魂縛門 Soul Binding Gate
Field Spell Card
Activate this card if you control no monsters and a Set Spell(s)/Trap(s) you control was destroyed by card effect this turn.
(1) During the Main Phase, if exactly 1 monster is Summoned whose ATK is lower than your LP and “Z-ONE” is in your GY: Destroy that monster, and if you do, take 800 damage, then inflict 800 damage to your opponent. 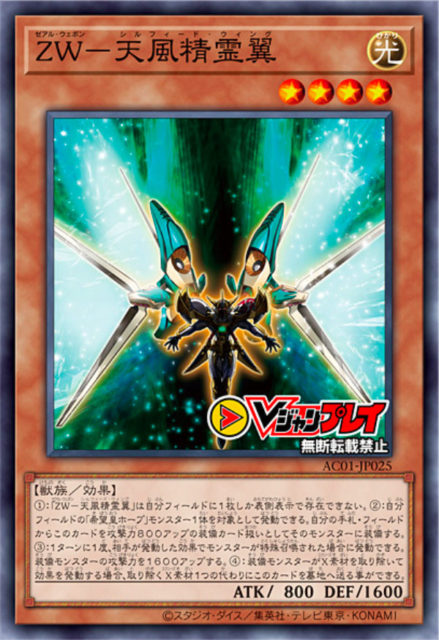 AC01-JP025 ZW－天風精霊翼 ZW – Sylphid Wing
LIGHT Beast / Effect
LV4 800/1600
(1) You can only control 1 “ZW – Sylphid Wing”.
(2) You can target 1 “Utopia” monster you control; equip this card from your hand or field to that target as an Equip Spell that gives it 800 ATK.
(3) Once per turn, if your opponent Special Summons a monster(s) with an activated effect: You can make the equipped monster gain 1600 ATK.
(4) If the equipped monster would activate its effect by detaching material(s), you can send this card to the GY instead of 1 of those materials. 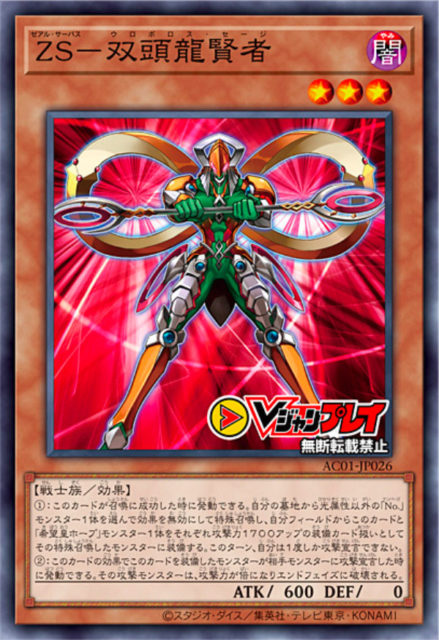 AC01-JP026 ZS－双頭龍賢者 ZS – Oroboros Sage
DARK Warrior / Effect
LV3 600/0
(1) When this card is Normal Summoned: You can Special Summon 1 non-LIGHT “Number” monster from your GY (but its effect are negated), and if you do, equip both this card and 1 “Utopia” monster you control the Summoned monster as Equip Spells that give it 1700 ATK each, but you can only declare 1 attack this turn.
(2) When a monster this card is equipped to by its own effect declares an attack on an opponent’s monster: You can make the attacking monster’s current ATK become doubled, but destroy it during the End Phase. 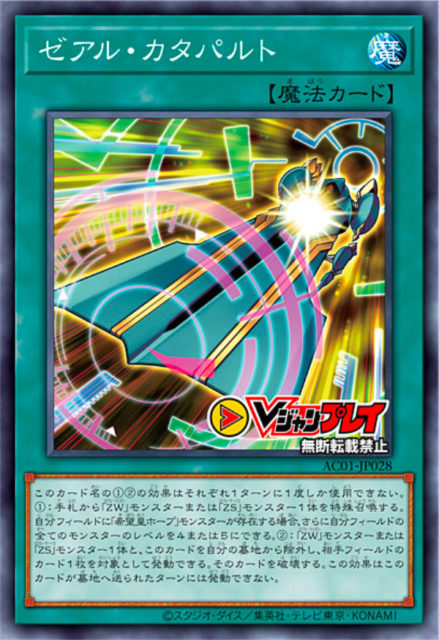 AC01-JP028 ゼアル・カタパルト ZEXAL Catapult
Normal Spell
You can only use this card name’s 1st and 2nd effects once per turn each.
(1) Special Summon 1 “ZW -” or “ZS -” monster from your hand, then if you control an “Utopia” monster, you can change the Levels of all face-up monsters you currently control to 4 or 5.
(2) If this card is in your GY, except the turn it was sent there: You can banish this card and 1 “ZW -” or “ZS -” monster from your GY, then target 1 card your opponent controls; destroy it. 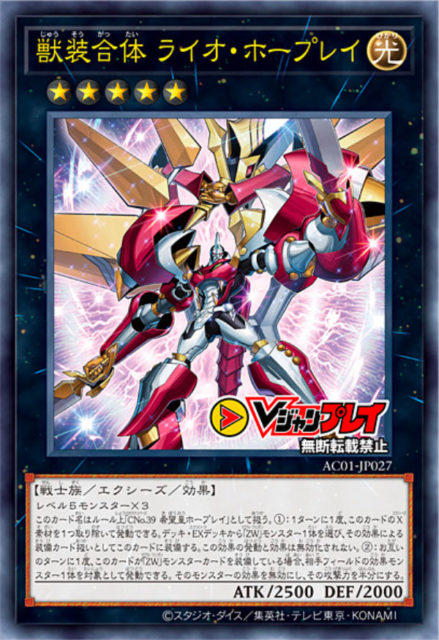 AC01-JP027 獣装合体 ライオ・ホープレイ Leo Utopia Ray
LIGHT Warrior / Xyz / Effect
RK5 2500/2000
3 Level 5 monsters
(This card’s name is always treated as “Number C39: Utopia Ray”.)
(1) Once per turn: You can detach 1 material from this card; equip 1 “ZW -” monster from your Deck or Extra Deck to this card, as if it were equipped by its own effect. This activation and effect cannot be negated.
(2) Once per turn, while this card is equipped with a “ZW -” Monster Card (Quick Effect): You can target 1 Effect Monster your opponent controls; negate its effects, and if you do, its current ATK becomes halved. 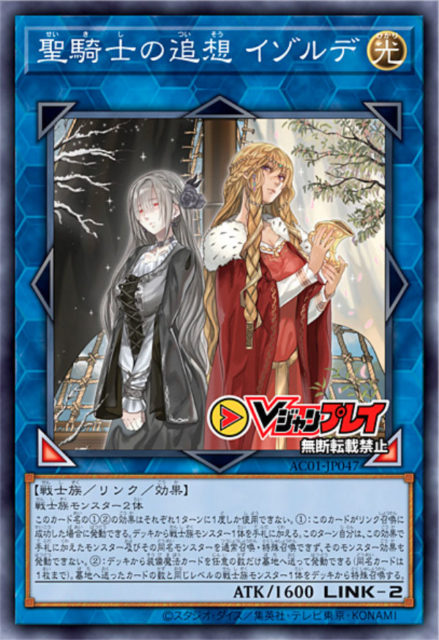 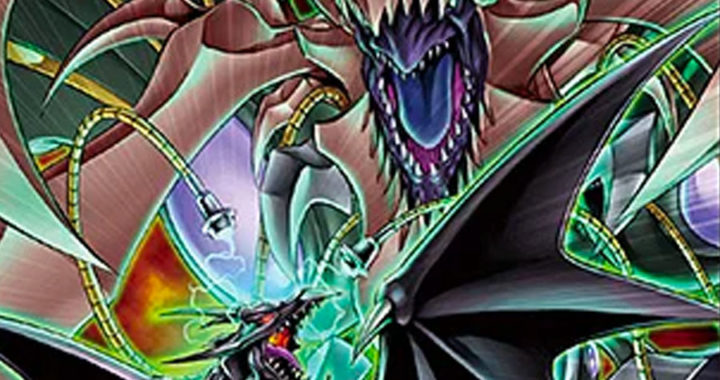 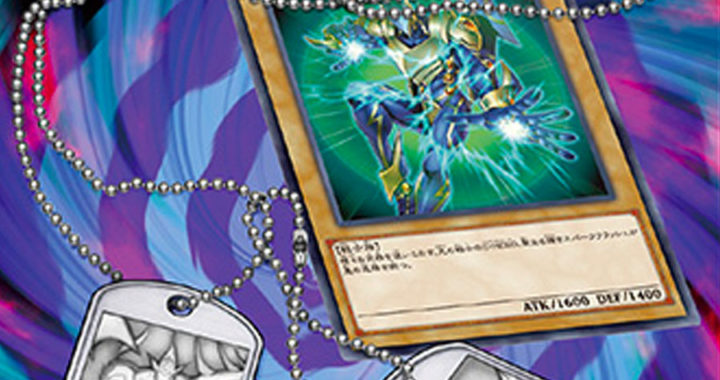 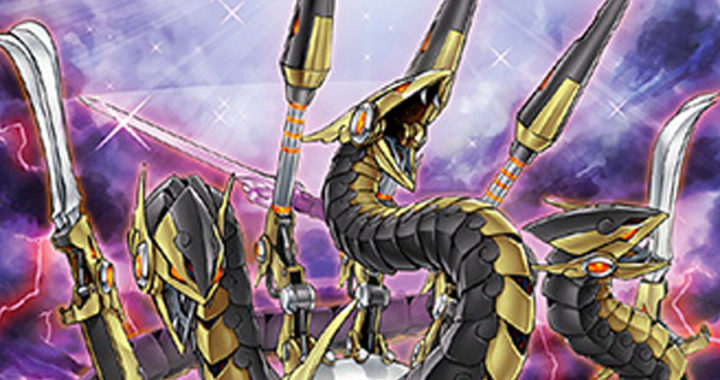 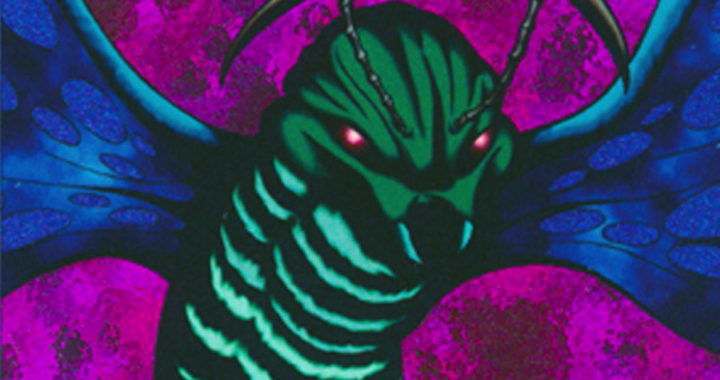