Time for some news from Japan’s YouTube channel with D/D/D Superdoom King Whitest Armageddon for the upcoming Collectors Pack 2017! 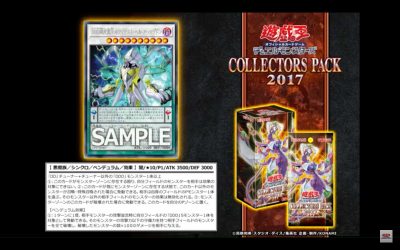 DDD Choushiioh Whitest Hell Armageddon / D/D/D Superdoom King White Armageddon
DARK Fiend / Synchro / Pendulum / Effect
PS1 LV10 3500/3000
Pendulum Effect:
(1) Once per turn, when an opponent’s monster declares an attack: You can target 1 “D/D/D” Synchro Monster you control; destroy as many monsters your opponent controls with DEF that is lower than or equal to the ATK of that monster as possible, and if you do, inflict 1000 damage to your opponent for each destroyed.
Monster Effect:
1 “D/D” Tuner + 1 or more non-Tuner “D/D/D” monsters
(1) Monsters you control cannot be targeted by an opponent’s card effect.
(2) If another monster is Normal or Special Summoned, while this card is already face-up on the field: You can activate this effect; your opponent chooses 1 Pendulum Monsters they control, negate the effects of all monsters your opponent controls, except that chosen monster.
(3) If this card is destroyed in the Monster Zone: You can place this card in your Pendulum Zone.

Translated by The Organization
Source from 遊戯王OCGチャンネル