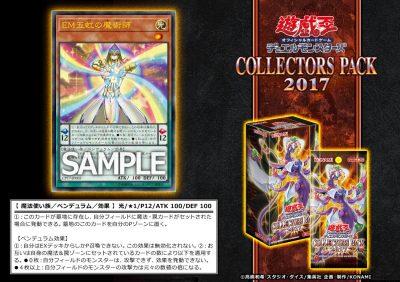 五虹の魔術師 Entermate Gokou no Majutsushi / Performapal Five-Arc Magician
LIGHT Spellcaster / Pendulum Effect Monster
LV1 100/100
Pendulum Scale: 12
Pendulum Effect:
(1) You cannot Pendulum Summon monsters, except from your Extra Deck. This effect cannot be negated.
(2) Apply these effects for each player based on the number of cards they have Set in their Spell & Trap Zones.
• 0: Monsters they control cannot attack, also their effects cannot be activated.
• 4 or more: The ATK of monsters they control become double their original ATK.
Monster Effect:
(1) If this card is in your Graveyard, if a Spell/Trap Card is Set to your field: You can place this card from your Graveyard to your Pendulum Zone.

Note: We’re calling it Five-Arc Magician because we think the name is a play on ARC-V (Arc Five) as Rainbow in French is Arc-en-Ciel

Translated by The Organization
Source from 【公式】遊戯王OCG‏