More updates are in for the upcoming Duel Links 5D’s World Update, namely where to get the cards and some new summoning animations! 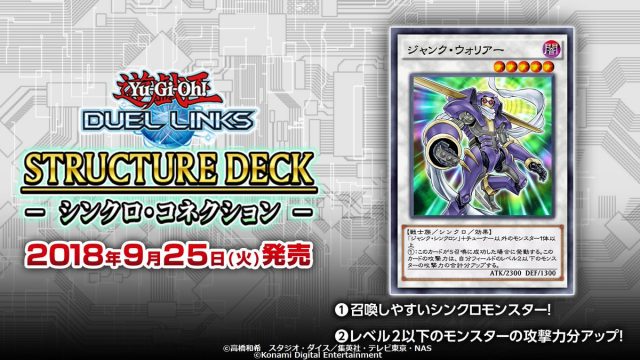 You can get Junk Warrior from the Structure Deck “Synchro Connection”, which goes on sale on September 25, along with the start of 5D’s World.
(Or of course just get it from the campaign!) 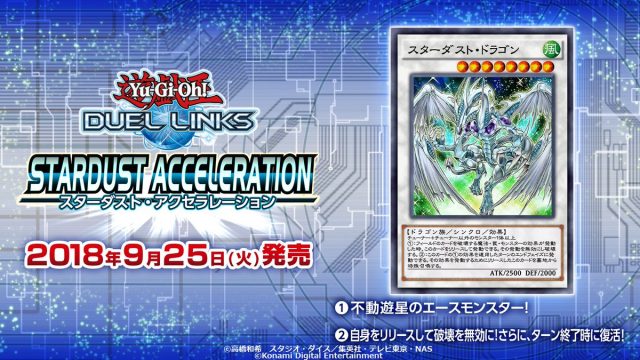 Stardust Dragon will be available through the new BOX “Stardust Acceleration”, which also goes on sale on September 25.

Sample deck lists that attendees of the Tokyo Game Show can try out for Yusei, Aki and Crow. Note that these are probably not the decks you get when you obtain their characters.

Yusei Skill: Mark of the Crimson Dragon: Dragon Head
At the start of the Duel, add 2 “Junk Synchron” to your deck and 1 “Stardust Dragon” to your Extra deck.

Aki Skill: Mark of the Crimson Dragon: Dragon Foot
At the start of the Duel, add 2 “Copy Plant” to your deck, and 1 “Black Rose Dragon” to your Extra deck.

Crow’s Skill: Mark of the Crimson Dragon: Dragon Tail
At the beginning of the Duel, add 2 “Blackwing – Blizzard the Far North” to your deck and 1 “Black-Winged Dragon” to your Extra deck. 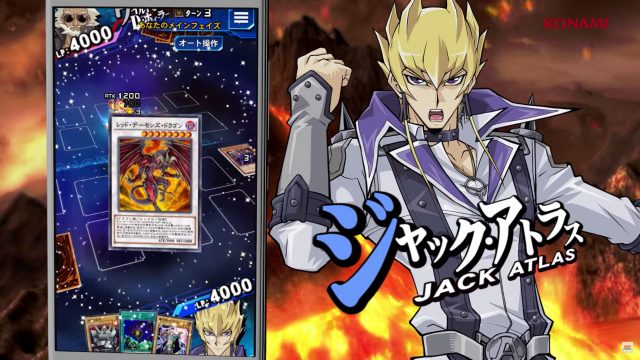 Also announced today, Jack Atlas will NOT be part of the starting characters you can use on the release of 5D’s World. Only the other 5 Signers will be available at the beginning.