Looks like the OCG Official Twitter is looking for more followers! A new campaign has been launched for Twitter where lucky winners from Japan will get a 20th Secret Rare version of Kanan the Swordmistress! 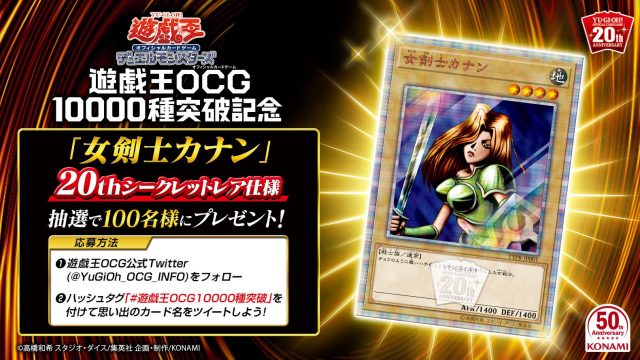 This new OCG Twitter Follow Campaign is open to everyone staying in Japan where 100 lucky winners will receive a 20th Secret Rare version of Kanan the Swordmistress.

The campaign starts immediately and ends on November 30. Details are as follows.

Rules:
1. Twitter account must be set as public
2. The prize will be mailed out only to Japan addresses
3. Do note the points for this campaign

Winner announcement:
1. Winners will be contacted via Twitter’s direct message
2. A deadline will be included in the message. Winners must respond within the deadline.
3. Prizes are scheduled to be shipped around end December 2019

Points to note:
1. There will be no duplicate winners
2. The details of the campaign are subject to change without prior announcement
3. For more questions on the campaign, please contact the Customer Service Office
4. You will be responsible for communication costs for this campaign
5. If your Twitter account is locked and you are unable to prove your win, you will not be eligible to win this lottery