Do note that this article only translate the changes in the OCG Rulebook for the Starter Deck 2017 (New Master Rule V1.0), compared to the previous OCG Rulebook (Master Rule 3 V1.1)

Also there is no new significant New Master Rule ruling mentioned in this Rulebook which has not been covered previously from the previous New Master Rule updates via VJump / Perfect Rule Book and other similar sources. However there is a new segment covering specifically on Speed Duels! 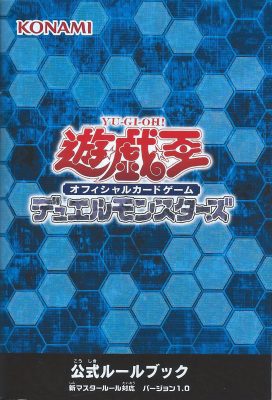 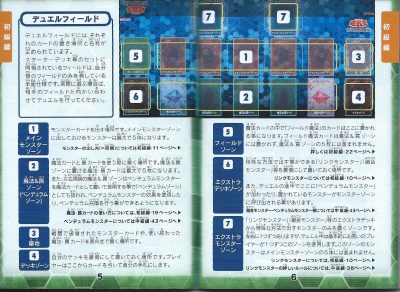 (Points 3 to 5 for the Graveyard, Deck Zone and Field Zone are unchanged from the previous rulebook)

6) Extra Deck Zone
Monsters that can be summoned via special methods such as [Link Monsters] and [Fusion Monsters] are placed here face-down.

[Pendulum Monsters] that are destroyed during a duel are also placed in this Zone, where they can be summoned to your Monster Zones later.

There is one each at the left and right side and generally, either player can only use one Zone during a duel. This Zone does not count towards the 5 Main Monster Zone. 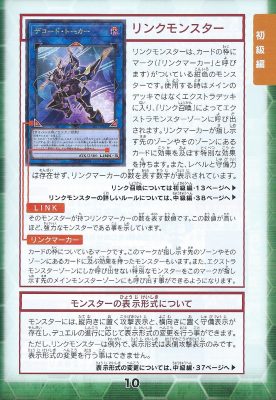 Link monster have markings placed at the side of the picture frames as seen on the picture. These markings are called [Link Markers]. Link monster are Blue in Colour and are placed in the Extra Deck, and are [Link Summoned] to the Extra Monster Zone. Zones that are pointed by the [Link Markers] may have special effects given to them. [Link Monsters] do not have levels or Defense points, and the amount of [Link Markers] will be indicated at the bottom right of the card.

Link Marker
Main monster Zones that are pointed by the [Link Markers] will enable a player to special summon a monster from the Extra Deck onto that designated Zone. 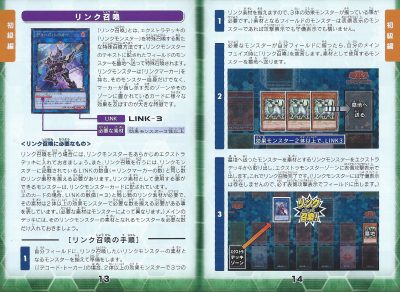 In the example of the above Decode Talker, the value of it’s LINK is 3, meaning that you need the same amount of Link Materials, where the materials must fulfil the conditions of 2 or more Effect Monsters. (The number of materials may vary between monsters) Make sure to add into your Main Deck the amount of Monsters necessary for the Link Monster’s materials. 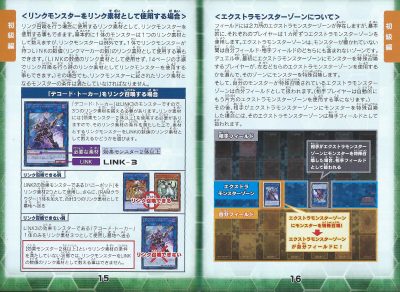 In the case of [Decode Talker], you need to use 3 effect monsters for a [Link Summon]. However as it’s Link Materials state [2 or more effect monsters], you can use a Link Monster using the value of it’s LINK for the Link Material, as long as it’s conditions are fulfilled.

Example of a legal Link Summon
A LINK-2 effect Link Monster such as [Honeybot] can count as 2 Link Materials. Together with a RAM Clouder, that would count as 3 Link Materials that can be sent to the Graveyard to summon Decode Talker.

The player that first summons a monster from the Extra Deck will get to choose which Extra Monster Zone they would like to use. After using the selected Extra Monster Zone, that Zone will become the player’s part of the field and the monster will be special summoned to that Zone. 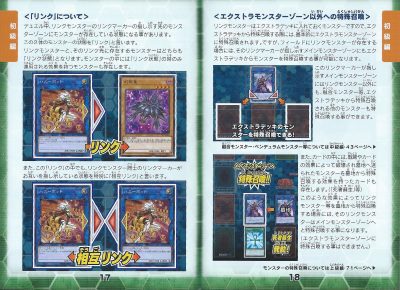 If there are 2 Link Monsters that are pointing to each other with their Link Marker, they are in the state of [Mutual Link].

Special summoning to outside the Extra Monster Zone [Page 18]

The Main Monster Zones that are pointed to by the Link Markers can also be used to special summon other types of monsters from your Extra Deck, such as Fusion Monsters. 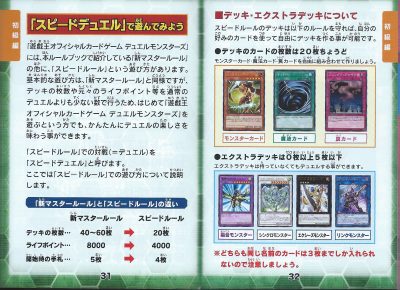 Besides the [New Master Rule], this rulebook also introduces how to play [Speed Duel] with the Yu-Gi-Oh! Official Card Game. Basic gameplay methods for this are similar to the [New Master Rule], just that there are minor differences such as having a smaller deck size. If you are just starting the Yu-Gi-Oh! Official Card Game, you may want to start off with Speed Duels to enjoy the fun of dueling more!

Here are the rule changes for Speed Duels.

More on Deck and Extra Deck
Build your decks freely based on these rules for the Speed Duel.

Deck Size will be set at 20 cards
Use Monster cards, Spell cards and Trap cards to build your deck freely.

Extra Deck can have 0 to 5 cards
You can duel even without an Extra Deck. 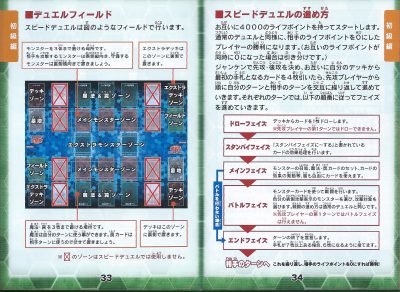 Here is the field for Speed Duel
Place up to 3 monsters here. Place your attacking monsters face-up vertically and your defending monsters face-down horizontally.
The Extra Deck is placed face-down in this Zone.
Place up to 3 Spell or Traps here. Spells can be used here during your turn, while Trap cards can be set here to be used during your opponent’s turn.
Your deck is placed face-down in this Zone.

Deicde who goes first, then both players draw 4 cards from their deck. The first player will carry out his / her phases then pass over to the opponent. A turn will proceed based in the following order of phases.

Draw Phase: Draw 1 card from the deck. (The first player will not draw a card during the first turn)
Standby Phase: Cards which state “During the Standby Phase”, are resolved here.
Main Phase: Summon your monsters, set your Spell and Trap cards, activate effects of cards. (If you do not do battle, you go into the End Phase after the Main Phase)
Battle Phase: Use the monster cards to do battle. Select your face-up Attack Position monster and choose it’s target to attack. Then proceed with battle like a normal duel. (The first player cannot go into the Battle Phase during the first turn)
End phase: Declare the end of the turn. If you have 7 or more cards in hand, discard until you have 6 left. 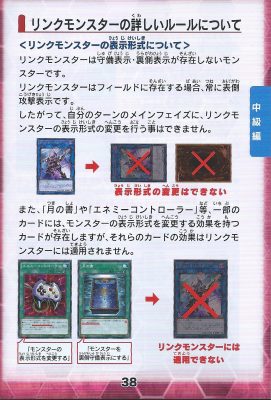 Also, cards such as [Book of Moon] and [Enemy Controller] may have the effect to change a monster’s Battle Position but those card effects cannot be applied on Link Monsters. 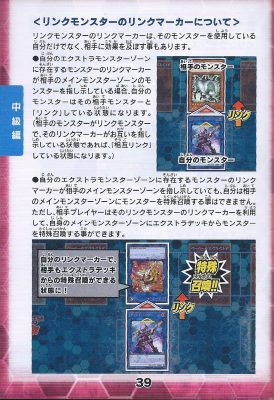 The Link Markers on a Link Monster do not only apply to your own monsters. They can help your opponent’s monsters gain effects as well.

When there is a monster in the opponent’s Main Monster Zone, that is pointed to by a Link Marker from a Link Monster in your Extra Monster Zone, those monsters are considered [Linked]. (If the opponent’s monster is a Link Monster where both monster’s Link Markers are pointing towards each other, they are considered to be in a state of [Mutual Link] 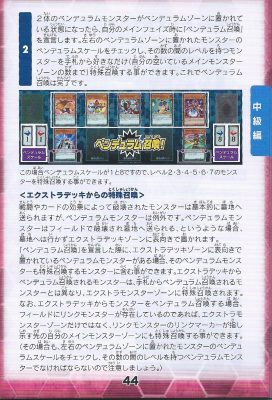 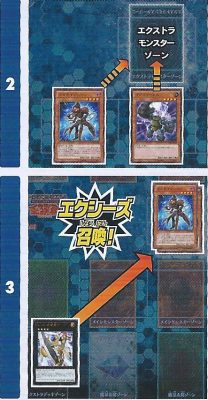 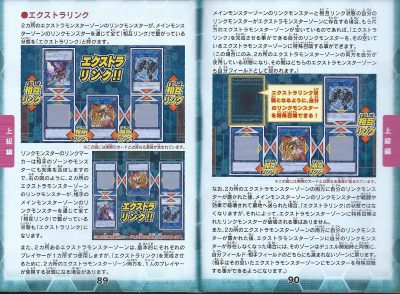 In this scenario, even if one of your Link Monsters in the main is destroyed by battle or by an effect and sent to the Graveyard, breaking the [Extra Link] state, the Link Monsters in your Extra Monster Zones will not be destroyed. 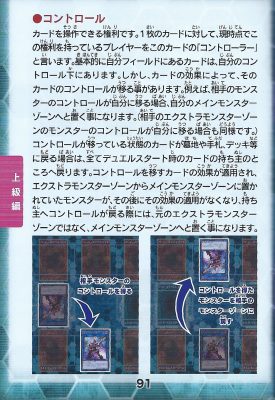 Related to the rights to use cards. The player who has the rights to use a card is considered to have [Control] of the card. Generally, cards on your field are considered to be under your control. However, it is possible to shift control of a card due to card effects. For example, if control of an opponent’s monster is shifted to you, that monster will be placed in your Main Monster Zone. (This is the same even if the monster shifting control comes from your opponent’s Extra Monster Zone).