The previously announced VJump subscription promotional cards have had their effects revealed! 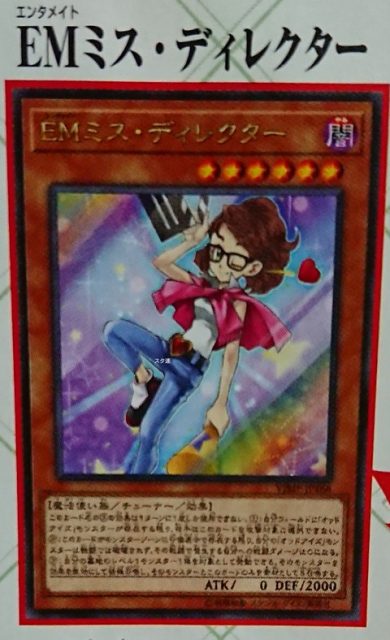 Entermate Miss Director
Dark Spellcaster / Tuner / Effect
LV6 0/2000
You can only ues this card name’s (3) effect once per turn.
(1) While you control an “Odd-Eyes” monster, your opponent cannot select this card for an attack.
(2) While this card is in Defense Position, “Odd-Eyes” monsters you control cannot be destroyed by battle, and you take no damage from those battles.
(3) You can target 1 Level 1 monster in your GY; Special Summon it, but its effects are negated, and if you do, immediately after this effect resolves, Synchro Summon 1 Synchro Monster using only that monster and this card as the materials. 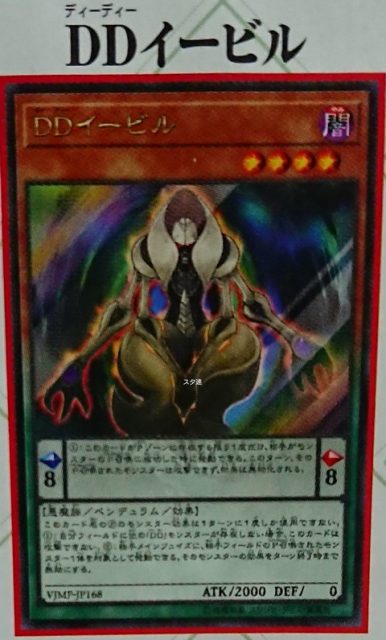 DD Evil / D/D Evil
Dark Fiend / Pendulum / Effect
PS8 LV4 2000/0
Pendulum Effect:
(1) Once, while this card is in the Pendulum Zone, when your opponent Pendulum Summons a monster(s): You can activate this effect; for the rest of this turn, that monster(s) cannot attack, also their effects are negated.
Monster Effect:
You can only use this card name’s (2) Monster Effect once per turn.
(1) Cannot attack unless you control another “D/D” monster.
(2) During your opponent’s Main Phase (Quick Effect): You can target 1 Pendulum Summoned monster your opponent controls; negate its effects until the end of this turn.

Smoke Mosquito
Dark Insect / Effect
LV1 0/0
You can only use this card name’s (1) and (2) effects once per turn each.
(1) During damage calculation, when you take battle damage from an opponent’s monster’s attack: You can Special Summon this card from your hand, and if you do, halve the battle damge you take from this battle, and end the Battle Phase after this Damage Step is over.
(2) You can target 1 face-up monster you control; this card’s Level becomes the same that monster’s until the end of this turn.