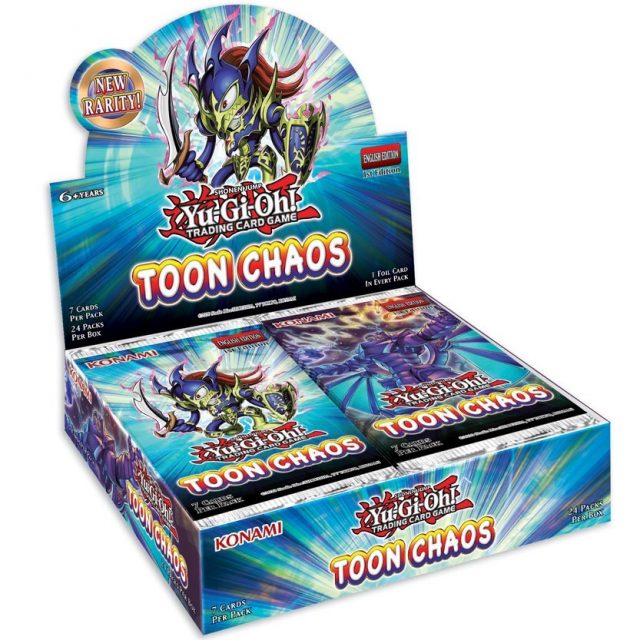 The Toon Chaos booster pack is due to arrive in the TCG on June 18, 2020 and it will contain new cards for the Toon deck, including the Toon Black Luster Soldier and Chaos Creator shown in the packaging above. Here are the blurbs for both monsters.

Toon Black Luster Soldier
“The very first “Chaos” monsters were used by Yugi in his Duels against Mai and Pegasus, but the new Toon Black Luster Soldier has a lot more in common with the upgraded Envoy of the Beginning model from Invasion of Chaos – complete with the ability to banish your opponent’s monsters! In addition to this towering titan of toonacity, Toon Chaos has more new cards for your Toon Decks to vastly increase their speed and stability! Having trouble tuning in to the Toons you were looking for? Check out the new Spell Cards in Toon Chaos that let you channel surf until you find the Toons you want, right out of your Deck!”

Chaos Creator
“For the ever-popular Chaos theme, Toon Chaos also introduces new Chaos versions of older monsters, like the Chaos Creator that can simultaneously Special Summon a banished monster and return other banished monsters to the Deck! Toon Chaos has 3 new Chaos monsters for Decks full of LIGHT and DARK monsters, including a boss monster that fits perfectly into the “Dream Mirror” strategy from Rising Rampage and Chaos Impact, plus new cards to help you find those monsters and Summon them. Let the chaos commence!”